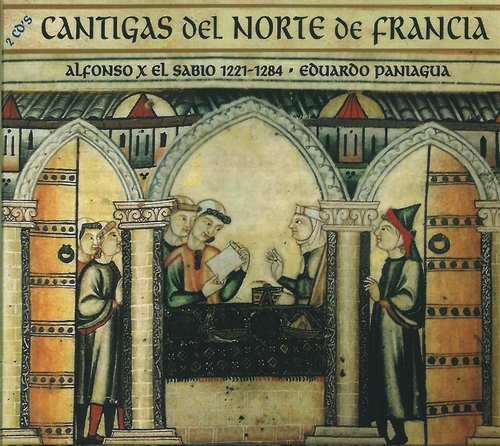 CD 2 - Arras & others:
CSM 68 rival lovers in arras
CSM 259 the minstrels and the candle of arras (instrumental).
CSM 105 the maid of arras, a kiss for a leper
CSM 42 the ring and the statue (instrumental).
CSM 88 the gluttonous physician - monk
CSM 269 the deaf-mute boy.
CSM 254 two renegade monks (instrumental).
CSM 37 prodigious healing in berrie.
CSM 137 the lustful knight
CSM 308 the woman with kidney stone
Of the 420 Cantigas de Santa Maria contained in Europe’s richest medieval Marian song book, 356 narrate the miracles performed by the Virgin Mary. The others are songs of praise; prayers and Marian celebrations. The music and form of Alfonso X’s Cantigas resemble other contemporary European melodies, especially those from France, but their originality is rooted in the cultural background of Mudéjar Spain. The same can be said of the miniatures that decorate the song books. For Alfonso X, the regal author, "facer sones"(to make sounds) was of no less importance than "pintar" (painting), "contar, trovar y rimar" (singing, composing verses and rhyme) in Galician Portuguese. Over 80 Cantigas are about miracles that happened in French lands and are mainly located at shrines in Soissons, Laon, Chartres, and Rocamadour, but they also take place all around the country. In 1996, we recorded a first selection of 11 Cantigas on Pneuma PN-520 "Cantigas of France". In order to complete our Retrospective Recording of the Cantigas, we need to look at France once again, and to do so, we have arranged these wonderful songs in three groups: this double CD with Cantigas of Gaul or Northern France, another double CD for Cantigas of Occitania and Provence from the centre and south of France and a sixth CD for Cantigas of Paris and surrounding places such as Beauvais, Chartres and Orleans. From the 11th century onwards, collections of miracles attributed to the Virgin Mary were being composed in increasing numbers in Europe, at first in Latin and later in vernacular languages. “The Miracles de Nostre Dame” by Gautier de Coincy, Gualterius de Consiacco 1177-1236, prior of Vic-sur-Aisne, a district of Soissons in Northern France and trouvere at the Abbey of Saint-Médard de Soissons, are worthy of note. Coinci also mixes cantigas about miracles with cantigas of praise. In Spain, Gonzalo de Berceo 1221-1264, composed his Milagros de Nuestra Senora (Miracles of Our Lady) in Castilian Spanish. Other coincident sources of miracles are the “Speculum Historiale” by the Dominican Vincent of Beauvais c.1190-1264, De “Miraculis Beatae Mariae suessionensis” (Soissons) by Hugo Farsitus, companion of St Bernard of Clairvaux, mentioned in cantiga 61, and the “Liber Mariae” by Alfonso X’s collaborator, Fra Juan Gil of Zamora. Other sources of miracles include Herman de Laon, Gobius, Etienne de Bourbon, Jean Le Marchand and the miracles of Provence. Eight cantigas mention Soissons with references to the construction of its churches. Miracles occurred at the Abbey of Notre Dame, destroyed during the French Revolution, the Abbey of Saint-Médard and the Cathedral of St Gervais and St Protais. Soissons was a Gallo-Belgian village, known as Novidunum in Roman times, and was the capital of the kingdom of Siagrio in the 5th century, and of the kingdom of France under Clovis I. Arras is named in three cantigas, where miracles occur at the church of Notre Dame and the Abbey of Saint-Vaas. The rest of the selected Cantigas are located in nearby places or in locations that are not specified when the subject matter is particularly scandalous. Many of the miracles these cantigas narrate have a connection with the disease known as "St Martial’s Fire", a painful type of leprosy which was considered a plague in the 13th century. The music to Cantiga 298 has not survived and we have adapted the simplified melody of Cantiga de loor 180.
Recorded in 2019 in Madrid by Hugo Westerdahl, Pablo Villuendas and Miguel Laregla.