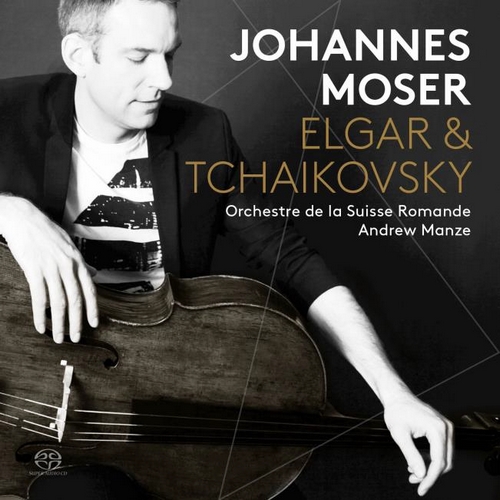 Nocturne For Cello and Orchestra From Six Pieces for Piano Op.19, No. 4

Andante Cantabile For Cello and String Orchestra From String Quartet No. 1, Op. 11

Pezzo Capriccioso Op. 62 - Morceau de Concert for Cello and Orchestra (1887), Andante con moto
The profoundly moving, elegiac lyricism of Elgar and the wistful charm and brilliance of Tchaikovsky are on full display in this irresistible new release from PENTATONE played with consummate vinuosity by the German-Canadian cellist Johannes Moser with the Orchestre de la Suisse Roma nde under Andrew Manze. Composed at the end of the First World War, Elgar's powerful Cello Concerto in E minor is one of his best-loved and most deeply-felt works. The soloist's wrenching chords which open the work announce a mood of profound resig nation and loss; gone is the youthful swagger of his earlier works, replaced instead with lonely introspection and longing, especiaIly in the sublimely beautiful Adagio. The cello is given free rein in the vigorous final movement but the opening mood prevails as an anguished outburst from the cello brings the work to a close. No such dejection hangs over Tchaikovsky's delightful Variations on a Rococo Theme which ooze elegance, ineffable charm and daring dispiays of technical brilIiance. While the Pezzo Compose finds Tchaikovsky in a more restrained mood, with the Nocturne and Andante Cantobile he wears his romantic heart full on his sleeve. The great Russian writer Leon Tolstoy is said to have wept when he heard the Andante Cantabile and its sumptuous theme shows Tchaikovsky's unerring gift for haunting melodies. It remains a special gem in the repertoire.
This album was recorded at Victoria Hall, Geneva, Switzerland, July 2016