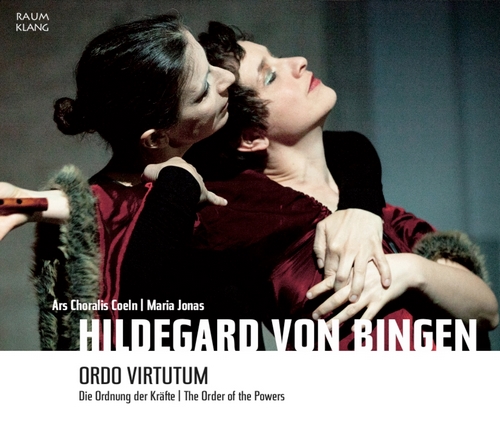 Bingen: Ordo Virtutum - The Order of the Powers

She was the most important universal scholar of the Middle Ages. Innumerable works give evidence of her impressive erudition and of her exceptional linguistic and musical talent. Not only during her lifetime did the abbess, poet, and composer Hildgard of Bingen have great influence on theological and societal nexuses, but even today she is esteemed throughout the world for her world view and visions.

For ten years, the mystery play Ordo virtutum by Hildegard of Bingen has been an important component in the repertoire of the women’s schola Ars Choralis Coeln. Under the artistic direction of Maria Jonas, the ensemble has occupied itself intensively with the interpretation and realization of the work. After diagnosis of the texts and in-depth studies, Maria Jonas translated the title of the work as “Order of the Powers.”

This is now the subtitle of the CD recording issued by Raumklang. Divine and heavenly powers are confronted with “diabolic” vices. In order to maintain the “Ordo,” God’s order of the world, the human soul is given powers that enable human beings to withstand the profligate. Hildegard’s fundamental idea: a human being is responsible for himself/herself and has to bear the consequences for his/her own decisions. A revolutionary concept in the Middle Ages!

In the recording by Ars Choralis Coeln, Diabolus (the devil) does not have a voice, but plays recorder – performed here by Lucia Mense, who developed medieval playing techniques as well as contemporary sounds and noises for her role. With these the devil attempts to seduce Anima (the soul), who expresses the devil’s influence on her – and vicariously on all of our souls – with a Babylonian confusion of languages. With the centuries-old Ordeo Virtutum, the Ars Choralis Coeln opens a path to an understanding of a great mystic who told stories directly from heaven.