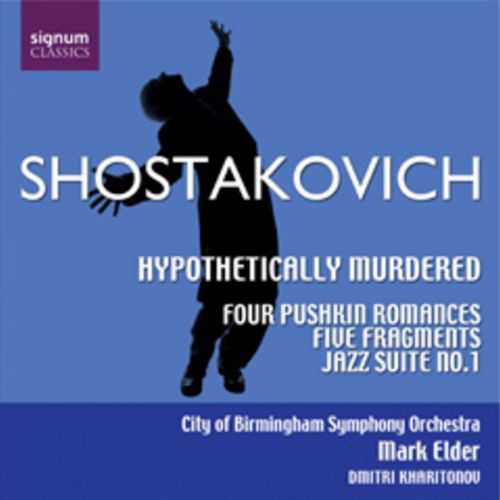 Hypothetically Murdered Orchestral Suite Op.31A
Four Romances on Poems by Pushkin, Op.46 for Bass and Chamber Orchestra
Five Fragments, Op. 42
Suite No. 1 for Jazz Band, sans Op.E
Signum Records are delighted to welcome the CBSO, under the direction of Mark Elder, to the Signum label.

For Shostakovich the six years which span this recording (1931 – 1937) were a period of almost incredibly change and upheaval. It was at this time that the young man faced his first serious political difficulties which culminated in the terrors of 1936.

In 1930, the composer met the celebrated vaudeville and pioneer jazz-performer Leonid Utiosov, an astonishing talent who introduced Shostakovich to the world of the theatre. Hypothetically Murdered was written in 1931 to open the Music Hall’s new season. After its initial run, the show was not revived and at some point, probably during the siege of Leningrad, the full-score, parts and libretto disappeared, leaving only a folder with around 40 pages of detailed piano sketches with instrumental indications. The Orchestral Suite Op. 31a, given its world premiere recording on this disc, consists of all the complete surviving orchestral numbers from the folder of sketches, reorchestrated from the composers scribbled notes, and in the style of his surviving theatre music from the period.

Nearly six years after Hypotheically Murdered, Shostakovich finished his Four Romances on Poems by Pushkin Op. 46. By this time the composer, and his messages, have profoundly changed. These Romances are music of mature seriousness, and dark with sorrow set against the literary work of the greatest and most humane of all Russian writers. After finishing the Romances, Shostakovich went on to create the Fifth Symphony, using motifs and fragments from the first poem – Rebirth. Thus he was able to hide the words of Pushkin’s passionate poem, a declaration to the power of art to survive barbarism and oppression, beneath the musical argument of his symphonic finale.

The fascinating and rarely performed Five Fragments, written in a single sitting in July 1935, are one of Shostakovich’s last experimental works. They prepare the ground for the composition of the massive Fourth Symphony, just as the Romances do for the Fifth.

The popular Suite for Jazz Orchestra No. 1 was written early in 1934. This delightful highly ironic music is a continuation of the spirit of laughter and adventure that had earlier led Shostakovich to work with the great Utiosov on Hypothetically Murdered. As with most ‘Soviet Jazz’ of the period there is not much jazz here, more of a feeling of operetta and cabaret music and also of Jewish songs. Despite such jollity there is always an undertone of depth and darkness, of real sadness and foreboding underlying the sentimentality and parody.