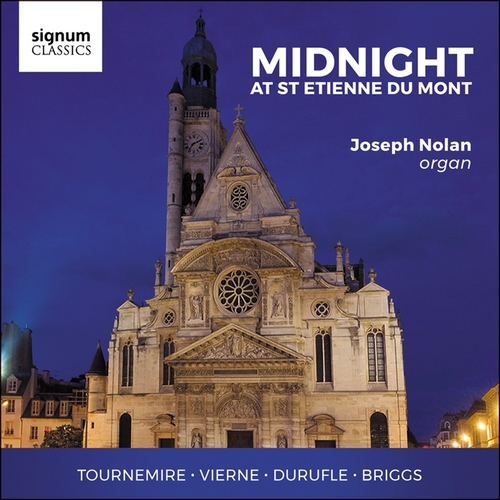 Briggs:
Le Tombeau de Durufle
Born in Bordeaux, Tournemire (1870-1939) studied in Paris with Franck, in 1898 succeeding him (following Gabriel Pierné) as organiste titulaire at Sainte-Clotilde. Today he’s remembered principally for his L’Orgue Mystique, Opp 55-57 (1927-32) fifty-one Gregorian-based Offices covering the cycles/feasts of the Catholic liturgical year (Christmas, Easter, Pentecost). But, like his organ teacher at the Conservatoire, Widor, a mile down the Boulevard Saint-Germain at Saint-Sulpice, he was prolific in a number of areas. His neglected orchestral symphonies (eight in all, 1900-24, the last two the ‘Dance of Life’ and the ‘Triumph of Death’) are ultra-Romantic propositions acknowledging programmatic theatre as well Wagner and Mahler Mahler having in 1900 brought the Vienna Philharmonic on a money-losing trip to the Exposition Universelle (directing Beethoven’s Eroica and Fifth, Schubert’s Great C major and Unfinished, and Berlioz’s Fantastique), and in April 1910 his long-awaited Second to the Concerts Colonne. In 1930 Tournemire recorded some 78s for Polydor at the console of the 1859 Cavaillé-Coll organ in Sainte-Clotilde. Besides programming Franck the Chorale in A minor winning a Prix Candide in 1931 (forerunner of the Grand Prix du Disque, Josephine Baker taking the musique légere category that year) he volunteered five improvisations. Consummate early 20th century examples of the art (along with the three Vierne cut for Columbia/Odeon in 1928), these were transcribed and reconstructed by Duruflé in 1956-58. The two ten-inch sides on the plainchant Te Deum, especially admired by gramophone aficionados during the ‘menacing’ time between the Great Depression and the Second World War, eloquently contour, carve and cherish celebration in hallowed places. ‘Te Deum laudemus’, ‘Thee God we praise’.
Recording: September 2015, St Etienne du Mont, France