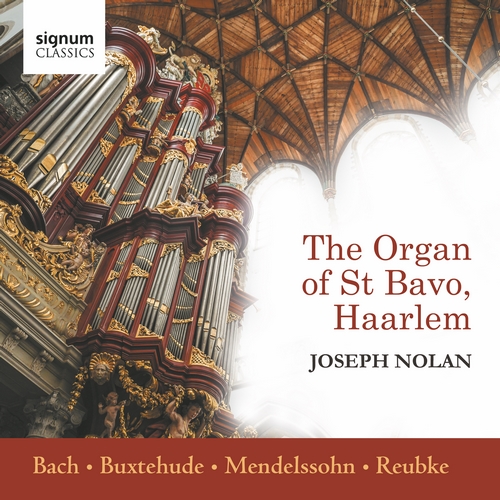 Julius Reubke:
Sonata on the 94th Psalm
Joseph Nolan marks his 10th release on Signum Classics with a recording on the remarkable 1738 Christian Muller organ of St Bavo in the Dutch city of Haarlem. Housed in one of the most spectacular organ cases in the world, the instrument's renowned clarity of tone makes it perfectly suited to Reubke's Sonata on the 94th Psalm, which forms the heart Nolan's programme alongside works by Bach, Buxtehude and Mendelssohn.

British-Australian organist and choral conductor Dr Joseph Nolan has been hailed by ABC Classic FM as ‘an extraordinary musician’, by BBC Radio 3 Record Review as ‘Magnificent’ and by Gramophone as ‘perceptive and intensely musical’. A nominee for Artist of the Year, Limelight Magazine also awarded Joseph its coveted ‘Recording of the Month’ for his ninth disc for Signum Records from St Etienne du Mont, Paris (SIGCD470), the church and organ of Maurice Duruflé – the first time in the history of the magazine that an organ disc has been awarded this distinction.
Recorded in The Grote Kerk, St Bavo, Haarlem, The Netherlands on 26th & 27th September 2017. Played on The Great Organ of St Bavo, Haarlem.