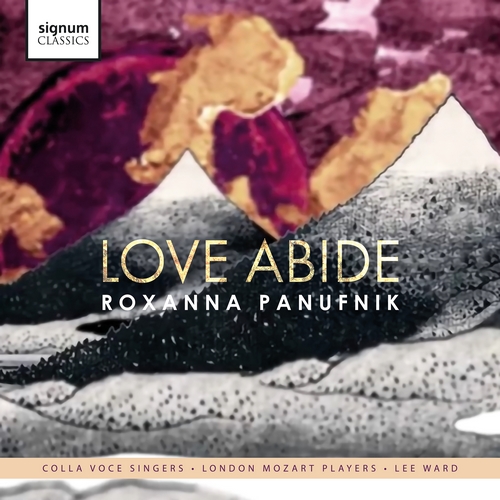 Love Endureth
Love Abide
Magnificat & Nunc Dimittis
Zen Love Song
Schola Missa De Angelis
Mass of the Angels
Roxanna Panufnik describes Love Abide as a way of “celebrating music, texts and chants of a diversity of faiths. My ongoing mission to build musical bridges between different faiths was inspired by the birth of my first child, in 2002, when I started to ponder deeply on what kind of world I was bringing her into. Religious conflict and wars that involve it are constantly in the news – but we rarely hear enough about the affirmative aspects of our many faiths, such as the phenomenal beauty of the varied cultures surrounding them. Exploring these cultures has unearthed a bounty of stunning chant and verse and has brought me closer to my own personal spiritual beliefs.”

“Each work on this CD focuses on a particular mood or sentiment around the theme of love, expressed in a musical language that echoes the origin of the words. I’ve drawn on texts from different faiths, from the 15th century Zen Master Ikkyu Soyun to the well-loved 13th chapter of 1 Corinthians; from the Christian mass setting to the 14th Century Sufi poet and mystic Rumi, to the ancient Hebrew Psalm 136 (135). And I’ve married a traditional Anglican text with a Catholic one – creating a truly Ecumenical Magnificat. Within the music you will hear fragments of Spanish Sephardic chant, Christian plainsong, Sufi rhythms and a Japanese lullaby, to soothe the soul.”

“Love Abide encapsulates the very contemporary ethos of multicultural spiritual devotion in a world populated by a rich diversity of faiths – all feeling, as deeply and as aesthetically, the compelling potency of music with love.”