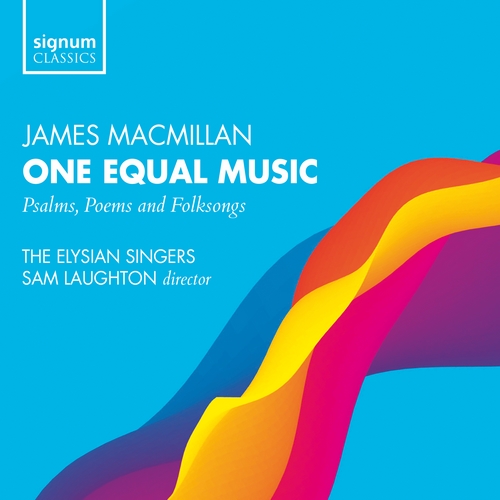 Psalms:
Blow the trumpet in the new moon
Children are a heritage of the Lord
Miserere
Domine non secundum peccata nostra

Poems:
One equal music
To my successor
When you see the millions of the mouthless dead

Prayers:
Ave maris stella
Cecilia virgo
The Elysian Singers of London celebrate the enormous and varied contribution of Sir James MacMillan (b. 1959) to the choral repertoire over the last 20 years. Beginning with MacMillan’s blazing 2016 ‘choral fanfare’ Blow the trumpet in the new moon, the programme explores the spiritual and secular texts that have influenced MacMillan, also including his monumental setting of Psalm 51 Miserere.

The Elysian Singers of London is one of the UK’s leading chamber choirs. Known for its adventurous programming, the choir performs in and around London and has recorded many widely acclaimed CDs. This is the choir’s second recording of works by James MacMillan, following their critically acclaimed first disc with Signum Cantos Sagrados (SIGCD507).
Recorded in University College School, Hampstead London, from 28th-29th October 2017.