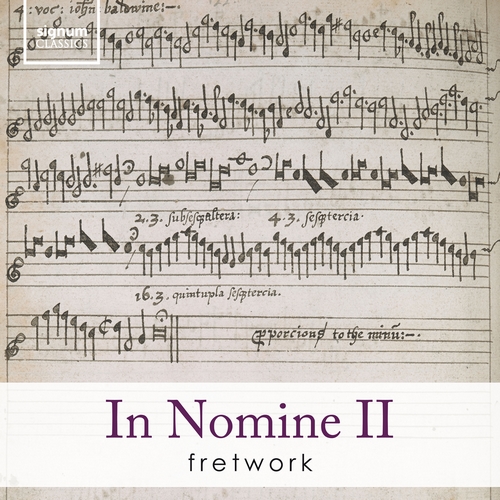 John Baldwin:
Proportions to the minim
Upon In Nomine 1592
In Nomine 1606

John Ward:
In Nomine in 5 parts

Henry Purcell:
In Nomine in 7 parts, Z. 747
Over thirty years ago, Fretwork made its first recording – well, technically speaking it was the second album to be recorded, but the first to be released – and it was called ‘In nomine’, which consisted mainly of 16th-century examples of this remarkable instrumental form.

While this isn’t an anniversary of that release, we want to look both back to that first release and forward, to bring the genre up to date. There were several examples of the In nomine and related forms that we didn’t or couldn’t record in 1987, and this album seeks to complete the project.

The form was created unwittingly by John Taverner (1490-1545). His 6-part mass, Gloria tibi Trinitas, is based on the plainchant of that name. In the Sanctus, at the words Benedictus qui venit in nomine Domini (Blessed is he that comes in the name of the Lord), the six-part texture is pared down to two and three parts; and then, with the words in nomine Domini, Taverner makes, for the only time in the mass, a complete statement of the cantus firmus, accompanied by three voices. This four-parts section – very beautiful as it is – must have struck contemporaries as some kind of perfection, to be used as a template, to be emulated and copied. And then those copies were copied and changed again.

Typically, an In nomine would have the alto, or second part, playing this cantus firmus in long slow notes of equal length. The other parts would weave counterpoint around it, sometimes commenting upon it, sometimes ignoring it. Typically, the cantus firmus starts and ends on the note D – but there are many exceptions to all these ‘rules’.
Recorded in St Mary Magdalen Church, Sherborne, Gloucestershire, 15th & 16th May 2017, 15th & 16th June 2018.