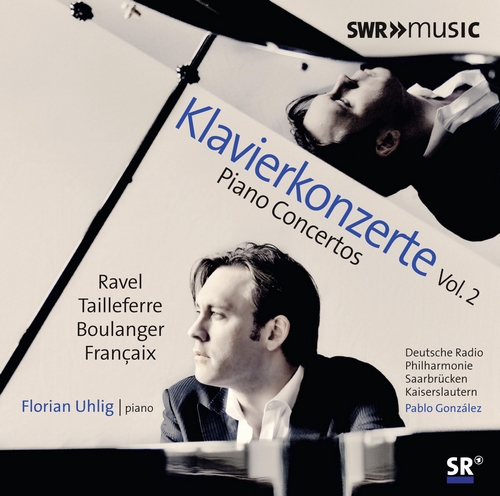 Maurice Ravel:
Concerto for piano and orchestra in D Major

Jean Francaix:
Concerto for piano and orchestra
The first recording with Florian Uhlig playing French piano concertos by Debussy (Fantaisie), Ravel (Concerto in G Major), Françaix (Concertino) and Poulenc (Piano Concerto) in 2013 was reviewed euphorically worldwide and became one of the SWRmusic bestsellers of this year. This new recording featuring the same musicians should be equally successful. Ravel’s Concerto in D Major for the left hand supplements the Ravel concerto of the 2013 recording, the same applies to Françaix’ Piano Concerto and the concertino in 2013. Whereas the works by the two female composers Germaine Tailleferre and Nadia Boulanger should be very welcomed discoveries for the most music lovers. The only woman in the „Groupe des Six“, a French composer group founded 1919/1920 under the leadership of the poet Jean Cocteau, was Germaine Tailleferre, who superbly represented the group’s maxim – against romanticism and impressionism, for a new objectivity and classicism – with her brilliant works in the 1920s. Her Ballad for Piano and Orchestra passed through different phases from 1920 till 1922 – starting as a pure orchestral work, then becoming a solo piece, and then finally as work with concerto character in the final version. Nadia Boulanger originates from a musical family and her father was a composer, too. However, she mostly became famous for her pedagogical passion: dozens of composer from France, the USA, and Poland and from other countries attended her composition classes. Her Fantaisie (variée) for Piano and Orchestra was composed already in 1912. Among the concertos on the CD this work sounds comparatively traditional and is inspired by her idols like César Franck or Sergei Rachmaninov – enriched by whole-tone-scales and occasionally impressionistic harmonic.
Recored 09-14.11.2015 at SWR Studio Kaiserslautern