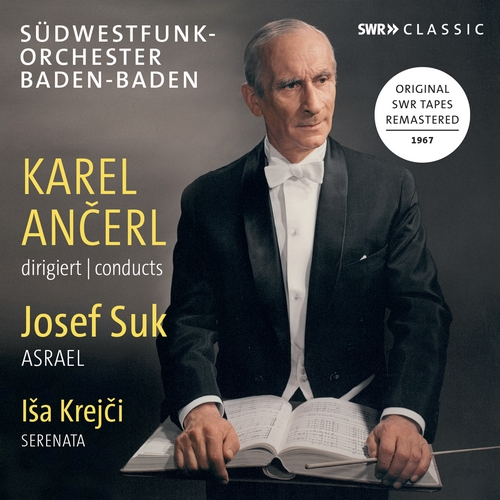 Isa Krejci:
Serenata für Orchester
Conductor Karel Ančerl's reputation is due mainly to his success in quickly establishing the Czech Philharmonic as one of the world’s most eminent and successful orchestras. In May 1967, one year before the political development in Czechoslovakia forced him to abandon his homeland, Karel Ančerl was invited to conduct the Südwestfunk broadcasting station's symphony orchestra in Baden- Baden. With limited time available, he recorded both Josef Suk's Asrael Symphony and Iša Krejčí's Serenata for Orchestra, two works that could hardly be more contrasted: a double-memorial work, and an entertaining showpiece full of joie de vivre. The recording of Suk’s Asrael is especially significant; Ančerl had never previously recorded it, despite it being one of the most important works in the Czech orchestral repertoire. A live recording with Ančerl and the Cleveland Orchestra is making the rounds of collectors’ circles, yet this is the first legal release of him conducting the symphony. Josef Suk (1874–1935) was the outstanding composer of his generation. He had studied in Antonín Dvořák’s composition class at the Prague Conservatory during the years 1891/92 and fell in love with Dvořák’s daughter, Otilie (1878-1905) while Dvořák was in New York (1892-95). They married on November 17, 1898. When Dvořák died on May 1, 1904, Suk was in the midst of composing his tone poem Prague, which he completed in the following months. During this time, he decided to write a (second) “symphony with a tragic character” in memory of his father-in-law. He began, but in the middle of the process, on 5 July 1905, his young wife died of heart disease. He then fell ill himself and, after his recovery, wrote two new movements in memory of Otilie, completing them respectively on January 3 and April 30. The title of the work, Asrael, refers to the angel of death anchored largely in the folk mythology of Shi’ite Islam, who separates the soul from the body by order of Allah. Iša Krejčí (1904–1968) demonstrates in the entertaining Serenata that he was an extremely well-versed humorist with a deeper side and, in the strings-only middle movement, an enchanting tone poet. Karel Ančerl applies unerring, tasteful touches to whip up the orchestra into a mischievously virtuoso tour de force.
Recording: Mai 1967 Baden-Baden, Hans-Rosbaud-Studio