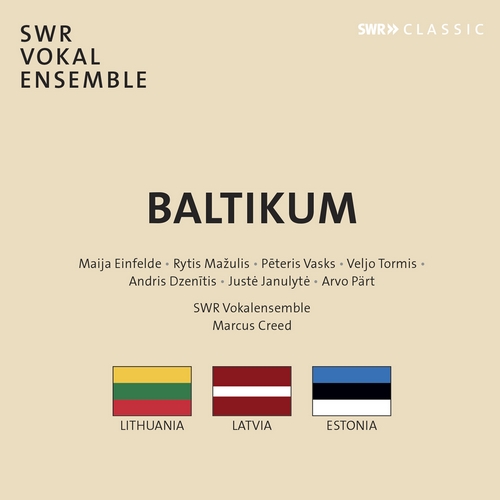 Arvo Pärt:
„And I heard a voice...“ for mixed choir a cappella
Each country of the Baltikum has its own musical founding fathers. Estonians recognise Heino Eller and the Latvians Jazeps VItols as the founders of their respective national music culture; Arvo Pärt was one of Eller’s students. The founding figure of Lithuanian art music and national art is Mikalojus Konstantinas Čiurlionis, whose output included fugues, sonatas, symphonic poems, music for piano and choral works. But these are not the composers presented on this album, with the exception of Arvo Pärt. Instead, the SWR Vokalensemble presents composers of the younger generation. With very different personalities, it's difficult to view their music collectively as unmistakeably Baltic: some share a certain musical solemnity; others a minimalist style; and while occasionally displaying American traits, all of it is rooted in the traditional music of the areas around the Baltic Sea.
Recording: 24.09.–02.10.2019; 10.07.2019, Funkstudio Stuttgart. This is the ninth and final instalment in the SWR Vokalensemble series dedicated to musical portraits of different countries.