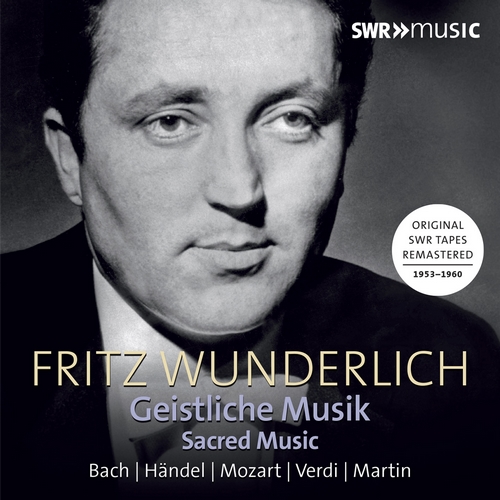 Frank Martin:
In terra pax
In all previous instalments of the SWR CLASSIC Edition featuring the great tenor Fritz Wunderlich (26 September 1930 – 17 September 1966) one fact is always mentioned – the enormous artistic versatility of this extraordinarily talented singer, who sang everything with the same absolute dedication, from Baroque music to Classical and Romantic operas to popular hits (Schlager) and contemporary music, and who enthralled his audience, whether he performed on student stages or in the world’s most prestigious concert venues. This box set presents Fritz Wunderlich as an interpreter of sacred music, an important and integral part of his profile. Fortunately, a number of his distinguished performances have been preserved, including the complete recording of Johann Sebastian Bach’s St John Passion, excerpts from the Christmas Oratorio, Handel’s Messiah (this is the first time the complete performance has been released), Mozart’s Requiem and Mass in C minor, and excerpts from Guiseppe Verdi’s Messa da Requiem. Fritz Wunderlich also recorded sacred music from the time before Bach; works by Heinrich Schütz and Dietrich Buxtehude, for example. These can be found on the album Fritz Wunderlich sings Music before Bach (SWR19051CD).

Despite his young age Fritz Wunderlich seemed to have effortlessly mastered even the most virtuoso challenges. And the way he used his famous ‘golden voice’ to master the challenging role of the evangelist in the St. John Passion is truly remarkable. It's safe to say that he always fully exploited his artistic potential for achieving an interpretation that the listener will never forget.

The recording of Handel’s Messiah presented here was made on 21 March 1959. Wunderlich was the only tenor involved, also singing the arias – and what a melodious voice, what intense devotion! The live recording of Mozart’s Requiem (Ottobeuren, 21 June 1958) features a stellar cast: apart from Fritz Wunderlich, soprano Agnes Giebel, alto Iva Malaniuk and bass Otto von Rohr also took part in the performance. Mozart didn’t finish his C Minor Mass KV 427. This live recording from 22 June 1957, however, includes the missing parts supplied by court music director Georg Alois Schmitt (1827–1902) from Schwerin. He mostly used works or parts of works Mozart himself had written. However, there is one exception: for the Credo, Schmitt used the Crucifixus from Johann Ernst Eberlin’s (1702–1762) Mass No.8. Such an edition of the work is rarely heard nowadays.
Recordings: Freiburg, Stadthalle, 23.02.1958 [Live] (Passion); Stuttgart, Markuskirche, 18.12.1955 (Christmas Oratorio); Stuttgart, Liederhalle, 21.03.1959 [live] (Messias); Ottobeuren, 21.06.1958 (Requiem); Stuttgart, Liederhalle, 22.06.1957 (Mass).