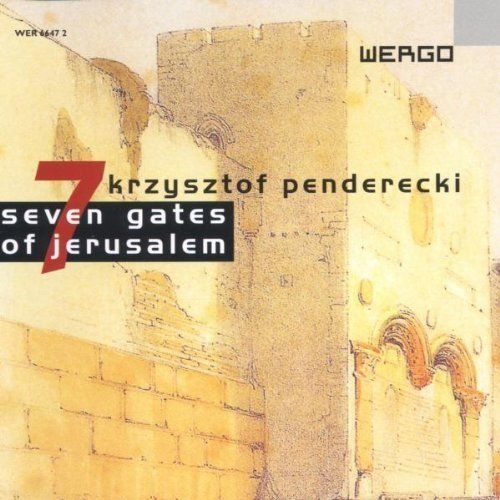 Wergo - WER 66472
Kompozytor
Krzysztof Penderecki (1933-2020)
Wykonawcy
Boris Carmeli, narrator
Bozena Harasimowicz-Haas
Izabella Klosinska
Wieslaw Ochman
Jadwiga Rappé
Romuald Tesarowicz
Henryk Wojnarowski
National Philharmonic Orchestra Warsaw
National Philharmonic Choir Warsaw / Kazimierz Kord
Krzysztof Penderecki first passed through the seven gates of Jerusalem in 1974, during an unofficial visit to Israel, which at the time was off limits owing to military conflicts with the Arabs. The Holy Land impressed the composer deeply, especially because he felt he was tracing Christ's steps. He visited Bethlehem and Nazareth, Masada and Hebron. Later he returned to Israel with pleasure. In 1987 he was awarded the important prize for music from the Wolf Foundation of Israel. With the support of Teddy Kollek, the legendary mayor of Jerusalem, among others, Penderecki received in 1995 a commission to compose a work for the celebrations for the third millennium of that city.

Penderecki, who had already composed five symphonies and planned out his sixth in concept, decided in favor of a new vocal work and chose for its theme and title "Seven Gates of Jerusalem", which was premiered on 9 January 1997 in Jerusalem - and called it his Seventh Symphony.

The number seven has long fascinated Penderecki. For "The Seven Gates" he wrote seven movements. The main theme of each of the respective moments II and IV has seven different notes that serve as the starting material for the passacaglia-like structures of these movements. Again and again, one finds in the score distinctly emphasized groups of seven quarter notes that are repeated on a single pitch. Finally, there are the seven powerful fortissimo chords that end the seventh and final movement of the work.

This CD which is accompanied by extensive liner notes (essays by Wolfram Schwinger and biographies of the performers in German, English and French / libretto in the original version of Latin and Hebrew with translations in German, English and French) presents, with Part VI of the moving oratory (a reading from chapter 37 of the book of Ezekiel) recited in Hebrew, the first recording of the original version - a live recording of a concert which took place in Vienna on 16 November 1999.