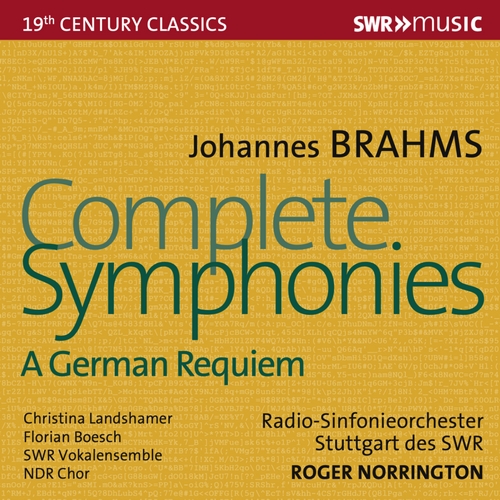 CD 4:
A German Requiem, Op. 45
Sir Roger Norrington was chief conductor of the former Stuttgart Radio Symphony Orchestra (today the SWR Symphonieorchester) for thirteen years. During that time he caused an international stir with what came to be known as ‘The Stuttgart Sound’, a synthesis of historically-informed performance practice with the technical capabilities of a modern orchestra. Whether in Mozart, Haydn, Bruckner or Brahms, Norrington sought to capture the performance experience of the time, adjusting the orchestra’s size and seating plan to create an authentic sound without vibrato.

This reissue of Brahms’ four symphonies, recorded in 2005, continues Norrington’s artistic credo of keeping as close as possible to the composer’s expectations. One of the main features – beside the ‘pure sound’ that uses no vibrato – are the quick tempi. Brahms left no metronome indications in his symphonies. However, the overall timings left by the Brahms conductor Hans von Bülow are so short, compared to those of today, that there can have been no very slow tempi in his interpretations. Norrington also considered one of the many hints left by another admired conductor and friend of Brahms, Fritz Steinbach: “By all means conduct the opening of Brahms’ First Symphony in 6, but it must sound in 2.”

A German Requiem is one of Brahms’ most popular compositions. Although the texts are taken from the Bible, the piece is not part of any ecclesiastical-liturgical tradition. Rather, it is aimed – as Brahms himself expressly emphasised – at people “who are in mourning” and unlike the Requiem of the Catholic Mass of the Dead, it is not a liturgical prayer for the souls of the deceased, but rather intended to console the bereaved.
Recordings: Stuttgart, Liederhalle, Beethovensaal, 04–06.07.2005 (CD 1-3), 20/21.02.2014 (CD 4).