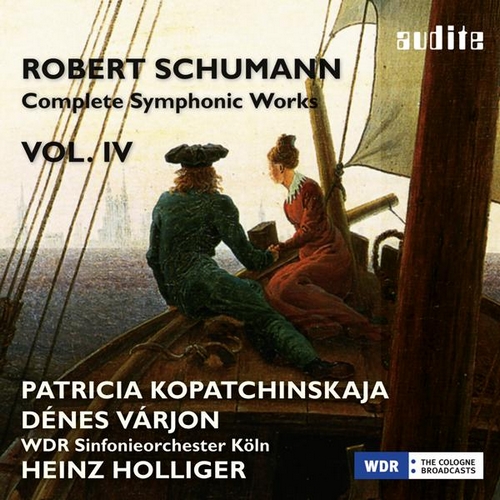 Violin Concerto in D Minor, WoO 1
Piano Concerto in A Minor, Op. 54
This fourth volume of the complete orchestral works by Robert Schumann presents both his most underestimated and his most famous concertos.

Patricia Kopatchinskaja takes the experimental qualities of the Violin Concerto, a late work, as a guiding principle for her individual interpretation, rising above clichéd Romanticist listening habits. A clear sound, thanks to reduced vibrato and open strings, as well as a surprisingly accentuated but also at times withdrawn style of playing, fully integrated into the orchestra, shapes her distinctive, energetic interpretation. The Baroque elements hinted at in the score are thus echoed in the performance. This "de-Romanticised" reading clearly distinguishes Schumann's Violin Concerto from the glittering Romantic concertos of the time, contrasting brilliant, attention-seeking virtuosity with musical mastery at the service of an overall concept.

In the Piano Concerto, Dénes Várjon also expresses a particular Romantic clarity, characterised by fresh sounds and fluid tempi. He trusts in the impact of the work standing on its own by opting for an approach that is not overly Romanticist. His stringent interpretation is informed by many years of performing Schumann, including his chamber works.

The next instalment in this series is set to follow in March: volume five of the Schumann edition, featuring Patricia Kopatchinskaja with the Violin Fantasy, alongside Alexander Lonquich with the Konzertstücke for piano, as well as the Konzertstück for Four Horns and Orchestra.

April will see the release of the edition's final volume, showcasing the "Zwickau" Symphony as well as the complete Overtures