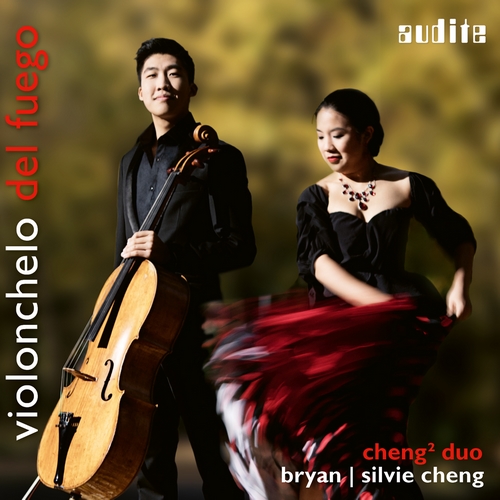 Pablo de Sarasate:
Zigeunerweisen, Op. 20
Following their critically-acclaimed debut album on audite, Violoncelle français, the Cheng2 Duo (pronounced “Cheng Squared Duo”) offers a compelling program of music by Spain’s foremost early twentieth-century composers. The interpretations are again steeped in a rare balance of unfiltered youthful joy and enthusiasm in their playing on the one hand, and mature, historically informed and profound interpretations on the other – this special balance becoming the trademark of the Cheng2 Duo and commanding attention from the very first note.

Violonchelo del fuego is the second release in a set to be recorded with audite, with each album focusing on the music of a particular country. A further recording of Russian works for cello and piano is already being planned.

Since debuting at Carnegie Hall in 2011, the Cheng2 Duo continues to be celebrated by audiences and critics alike for its artistic excellence, generous spirit, and compelling vibrancy. The Canadian duo is made of the siblings Bryan Cheng (cello) and Silvie Cheng (piano) and has been making music together for the past 15 years. The duo has presented recitals throughout North America, in Europe, and Asia, and has been featured at numerous international festivals, including Aspen (USA), Trasimeno (Italy), Ottawa Chamberfest and Festival of the Sound (Canada). The performers have not only proved success as Cheng2 Duo but have also won renowned awards as soloists, each in their own right.
Recording: October 24-26, 2017, Jesus-Christus-Kirche, Berlin-Dahlem. Played on cello: Bartolomeo Tassini, Venice (1754); piano: Yamaha CFX (Gerd Finkenstein)