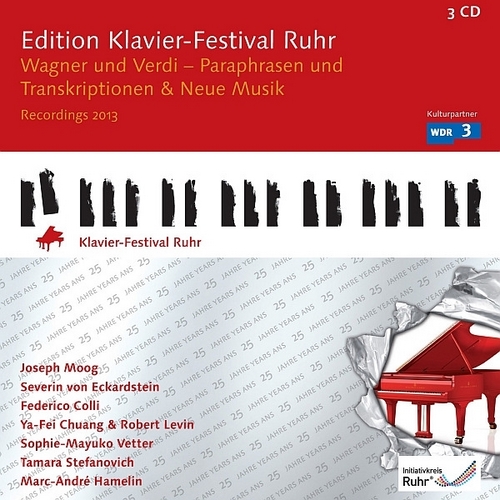 Avi Music - AVI 8553428
Kompozytor
Richard Wagner (1813-1883)
Giuseppe Verdi (1813-1901)
Wykonawcy
Joseph Moog
Severin von Eckardstein
Federico Colli, Ya-Fei Chuang & Robert Levin
Sophie-Mayuko Vetter
Tamara Stefanovich
Marc-André Hamelin
In 2013, the Ruhr Piano Festival was able to celebrate its 25th anniversary with resounding success! As honorary patron of this major musical event, I am particularly pleased to note that it has become an indispensable element within the international classical music scene. The Ruhr Piano Festival has played an important role in the transformation of the Ruhr area’s projected image, and today the Festival serves as a cultural beacon for the entire region. That is exactly what the founders and members of the Ruhr Circle of Initiatives were imagining when they called this model cultural project into being. …. It is a beautiful tradition to publish three CD’s at year’s end in order to preserve selected Festival performances for posterity. What is more, our series of boxed CD sets entitled “Edition Klavier-Festival Ruhr” reflects, in essence, one of the Festival’s stated goals that of providing young pianists who have delivered outstanding artistic performances at the Festival with long-term support for their future careers. Thus, on these CD’s recorded at the 2013 Ruhr Piano Festival, you can hear young musicians who are in the midst of launching an important, perhaps a truly outstanding career. One is also pleased to note the fine selection of repertoire: these CD’s feature rarely performed piano transcriptions and paraphrases of Wagner and Verdi operas. (From the Forword of the Patroness of the Festival Traudl Herrhausen)

“Let’s go to the opera!” was the slightly tongue-in-cheek motto we chose for the 25th celebration of the Ruhr Piano Festival. In 2013 we were celebrating the 200th anniversary of the births of Richard Wagner and Giuseppe Verdi! Neither of them was actually a very prolific piano composer Verdi, in fact, non at all. Instead, they both left brilliant opera melodramas to posterity. We thus chose to dedicate our Festival theme to these two “birthday boys” by featuring piano transcriptions and paraphrases of their vocal works, some of which we are now featuring in our annual retrospective CD collection. (Franz Xaver Ohnesorg, Excerpt from his Forword to the Booklet)