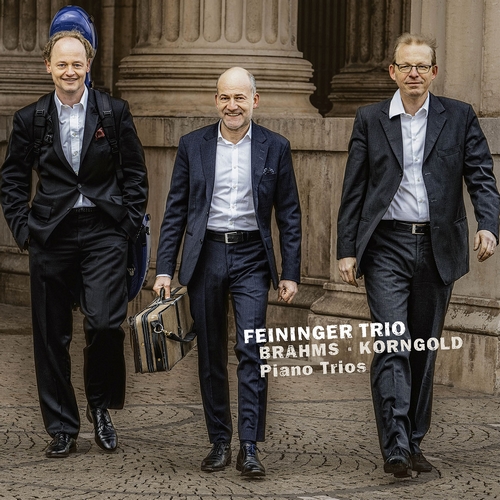 Erich Wolfgang Korngold:
Piano Trio in D Major, Op. 1
In its recording cycle, the Feininger Trio is pairing each of the three piano trios written by Brahms with a work by another Viennese composer: Alexander Zemlinsky, Ernst Krenek, and Erich Wolfgang Korngold, respectively. Brahms’s three piano trios are among the genre’s crowning achievements, and the members of the Feininger Trio were interested in exploring how the piano trio genre developed in the master’s wake.

Younger composers drew on Brahms’s legacy while opening a new window to Modernism and the 20th century, and that was the main criterion in choosing the three pairings. Biographical similarities among Korngold, Krenek, and Zemlinsky in their early years also played a major role in the Feininger Trio’s selection. Despite major stylistic differences, a red thread in their the three composers’ lives connects them all with Brahms.

An important element that differentiates Korngold from Brahms is Korngold’s dramatic, almost operatic manner of handling musical progression: Brahms would never have allowed himself such a dramatic approach. The piano chords in the first movement suggest this, along with a kind of Impressionism in the Larghetto, when the music starts to slip into chromaticism. These are not mere effects: they always occur for an inherent musical reason. The last movement’s exalted mood and the way the work ends have a daring cheekiness about them, which at the same time is profoundly conceived. Korngold does not merely write boldly: he carries out his boldness to its utmost consequences.

The Feininger Trio have been able to craft a unity out of a work such as this one, which sounds so unusual at first, thanks to the fact that the three musicians already know one another quite well. Nevertheless, in their playing, you can still hear how astonished they are in the face of this staggering accomplishment achieved by a twelve-year-old boy. (Excerpt of the booklet notes ater Volker Michael).
Recording: II 2020 (Brahms); VI 2020 (Korngold), Kammermusiksaal, Philharmonie Berlin.