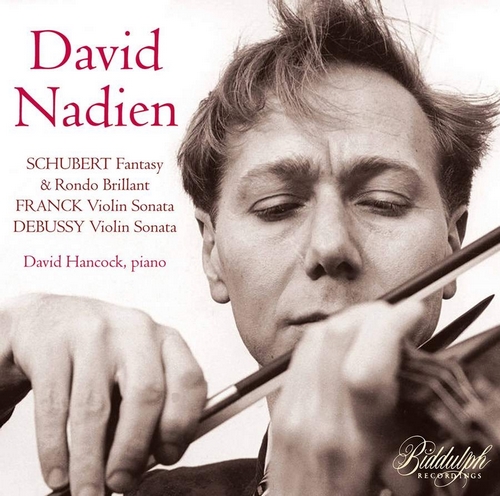 Faure:
Berceuse
Although remembered today as concertmaster of the New York Philharmonic under Leonard Bernstein, David Nadien is regarded as one of the greatest American violinists of the late-20th century and a legend among fiddle players. A student of Adolfo Betti, Adolf Busch, Ivan Galamian and Demetrius Constantine Dounis, Nadien won the prestigious Leventritt Competition at the age of 18. Not only did Nadien perform as concerto soloist, under Bernstein, but also George Szell, William Steinberg, Lorin Maazel, Stanislaw Skrowaczewski, and Seiji Ozawa. Furthermore, for over four decades, Nadien was the most sought after freelance violinist in the New York area, recording with such big-name stars as Tony Bennett, Nina Simone, Don McLean, Bette Midler, Billy Joel, Chaka Khan, and Sinead O’Connor. No matter what repertoire he plays, Nadien’s shimmering tone, with its beautifully focused vibrato, is unmistakable. Moreover, his immaculate technique and dead-center intonation - even in the most rapid passagework - is staggering. Yet beneath the virtuosic ease and elegant polish of his playing is an almost heart-wrenching intensity, not unlike that of his idol Jascha Heifetz. This CD features a reissue of Nadien’s début LP recording of the Franck and Debussy Sonatas, partnered with the American pianist David Hancock. It also includes Nadien and Hancock’s previously unissued recordings of Schubert’s Fantasy in C and Rondo Brillant in B minor.