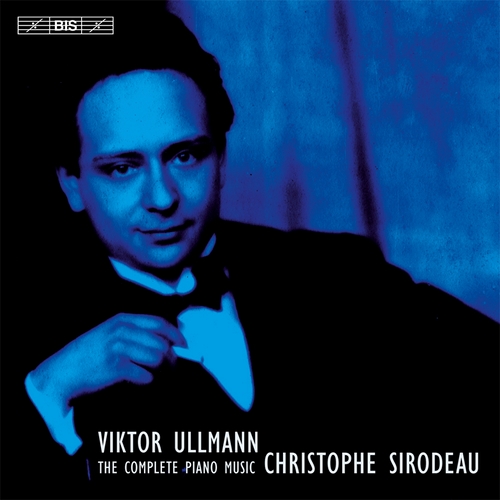 Piano Sonata No.1, Op.10 (1936)
Piano Sonata No.2, Op.19 (1938–39)
Piano Sonata No.3, Op.26 (1940)
Piano Sonata No 4, Op.38 (1941)
Piano Sonata No.5, ‘Von meiner Jugend’, Op.45 (1943)
Piano Sonata No 6, Op.49 (1943)
Piano Sonata No.7 (1944)
Variations and Double Fugue on a theme by Arnold Schoenberg, Op.3a (1933–34)
Set up for propaganda purposes as a ‘model Jewish settlement’, the Theresienstadt concentration camp has become a symbol of the immense cynicism that the Nazi regime was capable of. At the same time, the composers and artists incarcerated there, and their endeavours to continue their creative work under such conditions, have come to be regarded as a shining example of how art can transcend life and its everyday realities. While acknowledging all of this, Christophe Sirodeau in his illuminating liner notes states his own aim in making this recording: ‘Viktor Ullmann should be studied and played not as a victim of the Nazis but on his own merits, which in my opinion earn him an illustrious place in twentieth-century music.’ Although the release of this two-cd set of Ullmann’s piano music coincides with the 70th anniversary of the composer’s death, it is thus rather intended as a celebration of his life and work as a composer – from the Schoenberg Variations, which in their very first incarnation saw the light of day in 1929, to Piano Sonata No.7, completed a few weeks before Ullmann’s final deportation and death in Auschwitz. The seven piano sonatas sum up the composer’s highly individual style, on the edge of both the traditional tonal system and of Schoenberg’s method. The first four, composed in Prague before Ullmann’s deportation, pay tribute respectively to Mahler, Janácek, Mozart and, more obliquely, Bartók. But also in the three sonatas that he wrote in Theresienstadt, Ullmann includes references to other composers and compositions. Most impressively this occurs in the Finale of the Seventh, entitled Variations and Fugue on a Hebrew Folksong. The imposing closing fugue also makes conspicuous use of the BACH motif, a Hussite chorale and the Lutheran chorale Nun danket alle Gott, testifying, in Christophe Sirodeau’s opinion ‘to a desire to reaffirm – faced with the Nazi refusal to accept Jews who had been integrated into German culture for centuries – that he, Viktor Ullmann, was completely devoted to the long-lasting German cultural heritage’ – under the circumstances a true composer’s gesture of resistance