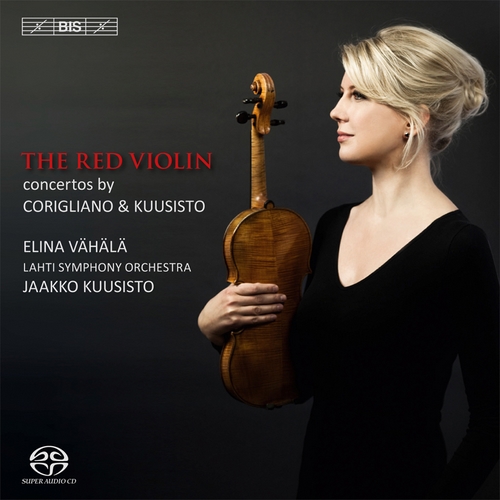 Jaakko Kuusisto:
Leika for symphony orchestra, Op. 24
Concerto for Violin and Orchestra, Op.28
John Corigliano:
Concerto for Violin and Orchestra ‘The Red Violin’
John Corigliano's violin concerto 'The Red Violin' originated as the score to a film about a violin by one of the Old Italian master-builders, and its journeys around the world throughout three centuries. While working on the film score, Corigliano also produced a one-movement concert version of it, which he later expanded into a full-scale concerto in four movements. The son of a violinist, Corigliano’s aim was to write a concerto in a style his father would have wanted to play, and he has managed to do so without sacrificing any of the music's communicative qualities, or its wealth of colours, emotions and atmospheres. The work is coupled here with a concerto of a similar broad appeal, composed by Jaakko Kuusisto, who is a highly respected violinist in his own right, as well as conductor. In his liner notes, Kuusisto recounts how he had toyed with the idea of writing a violin concerto for several years, but that the project only came into fruition after a commission from his colleague Elina Vähälä, and the liberating prospect of composing a work for another performer than himself. Appearing for the first time on BIS, the acclaimed violinist Elina Vähäla has a wide-ranging career, both geographically and in terms of repertoire. She made her début at the age of twelve, performing as a soloist with the Lahti Symphony Orchestra, which lends her spirited support on the present disc, and also performs the orchestral piece Leika. Using the Icelandic word for ‘play’ as its title, Kuusisto’s composition displays a playfulness and wealth of colours that makes it a perfect curtain raiser for this appealing disc.