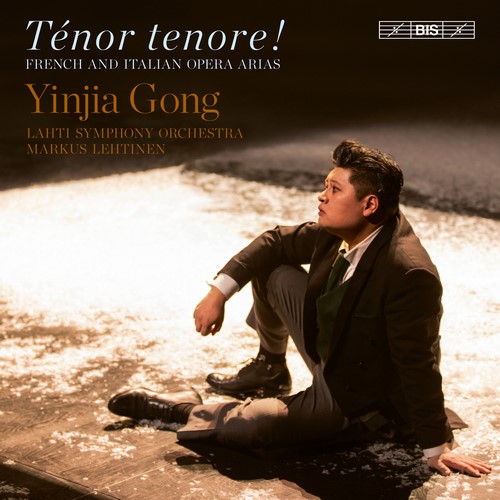 Jules Massenet:
Pourquoi me réveiller
Ah! fuyez, douce image
The myth of the modern tenor was born in Paris on 17th April 1837, when, at a performance of Rossini’s William Tell, Gilbert Duprez first sang a top C in the chest register. The hitherto unknown expressive power provoked a massive reaction from the audience and the tenor voice soon became a trademark of the young, valiant hero. Ever since, tenors have enjoyed an almost mythical reputation among music-lovers, and ranging from Caruso to the Three Tenors by way of the likes of Gigli, Björling and Bergonzi, they are the only classical musicians whose popularity extends far beyond specialist circles and across the entire world. Yinjia Gong grew up in the province of Guizhou in China, and developed an interest in music early on. While studying Chinese traditional musc he became fascinated with Western opera, and in 2008 his admiration for the great Swedish tenors Jussi Björling and Nicolai Gedda took him to Sweden. There Gong's impressive top register soon attracted attention, and in 2011 he was invited to perform at a gala concert at the Royal Swedish Opera, commemorating the centennial of Björling's birth. Appearing alongside singers such as Jonas Kaufmann and Charles Castronovo, Gong was given the honour of performing Puccini’s Nessun dorma – one of Björling’s ‘greatest hits’. Naturally, Nessun dorma is also part of the programme on Gong's début recording, along with a series of other jewels of the tenor repertoire, including Donizetti's Ah! mes amis from La fille du régiment with its famous multiple high Cs, and the even more taxing 'Postillion's Song' by Adolphe Adam featuring a resplendent high D. While including highlights in terms of both pitch and emotional content, the programme also charts the golden age of Italian and French opera from the beginning of the nineteenth century to the start of the twentieth