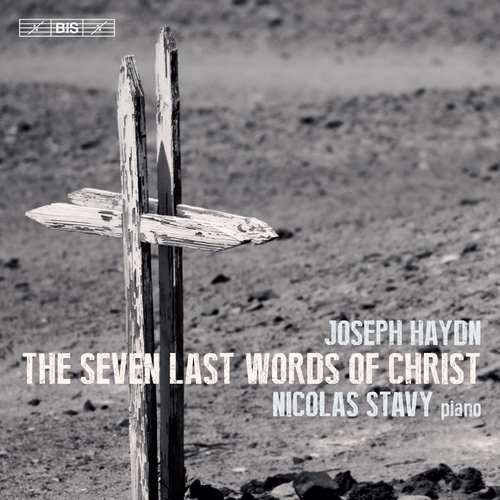 The Seven Last Words of Christ on the Cross, Hob. XX/1C
Andante con variazioni in F minor, Hob. XVII/6
The Seven Last Words of Christrefers to the seven short phrases uttered by Jesus on the cross, as gathered from the New Testament. Over the centuries the crucifixion has served as inspiration to countless composers, and settings of these utterances have become something of a subgenre, beginning in the Renaissance with early motets and continuing into our own time. By way of César Franck and Sofia Gubaidulina, composers ranging from Heinrich Schützto Tristan Murail have contributed versions using various combinations of voice and/or instruments.

One of the best known of these settings is probably the one by Joseph Haydn. The one – or rather the four: a rather complicated story begins in 1785, when Haydn received a commission from Cadízin Spain, at the other end of Europe. He was asked to compose seven slow movements, each ca 10 minutes long, to be played by an orchestra in alternation with the priest expounding on each of the seven words. Relishing this unusual challenge, Haydn accepted and ended up so pleased with the result that he immediately made a version for string quartet as well as authorising another one for keyboard. The work became so popular across Europe that ten years later the music was used one final time, in an oratorio for choir and orchestra. The work is here heard in the version for keyboard, performed by the French pianist Nicolas Stavy. He closes the disc with another unusual work in Haydn’s oeuvre, the Andante con variazioni, Hob. XVII/6, which has been described as ‘the deepest and most profound set of variations for piano composed between Bach and Beethoven’.
Recording: January 2006 at Temple Saint Marcel, Paris, France. Instrumentarium: Grand piano: Steinway D-274. Płyta wydana w opakowaniu BIS ekopak.