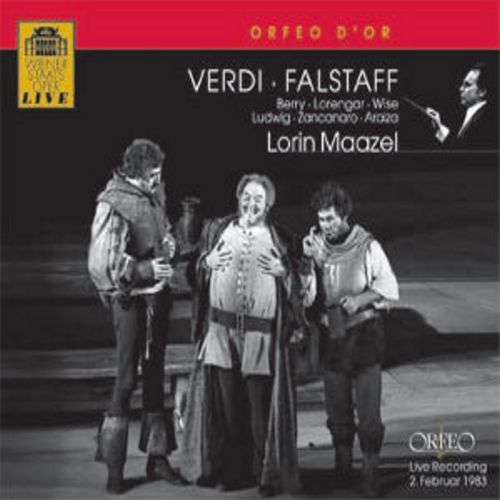 Orfeo - C 783092
Kompozytor
Giuseppe Verdi (1813-1901)
Wykonawcy
Walter Berry
Giorgio Zanconaro
Francisco Araiza
Heinz Zednik
Christa Ludwig
Chor und Orchester der Wiener Staatsoper / Lorin Maazel
Falstaff, Verdi's last opera, has a long performing history in Vienna (it was first performed in 1893), and just as long is the list of great conductors who have conducted it at the State Opera.These include Lorin Maazel, who presented his interpretation in 1983. featuring a magnificent ensemble of singers, first and foremost Walter Berry, who in the Indian summer of his career conquered the starring role as fat Sir John. He was equally at home in the joviality of the role and in its ruminative moments as he was in its roguish and impulsive emotional outbursts.The portly knight's object of desire and his antagonist was Pilar Lorengar as Alice Ford, possessed of vocal luminosity and perfect accentuation. Her jealous husband was played as an unbridled, dashing cavalier by the baritone Giorgio Zancanaro.As the young lovers, the silvery-bright soprano of Patricia Wise and the dark-toned tenor of Francisco Araiza complemented each other charmingly, both in timbre and in the naturalness of their intertwined phrasing. Nor did Christa Ludwig hold back in her renowned interpretation of Mistress Quickly, luring both Walter Berry and the Viennese public to their assignations in Ford's house and under Herne's Oak.With an ensemble such as this, the final fugue can truly make us believe that all the world's a joke - and listening to this live recording merely confirms it.