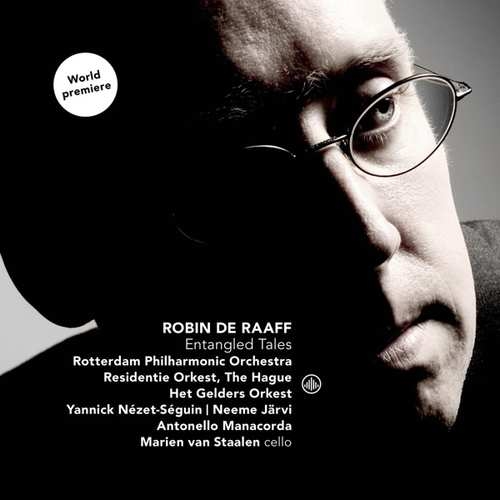 Cello Concerto
Entangled Tales
Symphony No. 3 “Illumination...Eclipse”
Marien van Staalen on the Cello Concerto: This cello concerto is a miracle, both for the listener and for the soloist. The listener is swept along through unexplored terrain. The instrumentation stands out – even for a master like Robin. For a cello, Robin’s concerto is innovative and challenging from a technical point of view. The premiere with Yannick and the orchestra was like a celebration – you can hear it. New work only reveals its secrets after a lot of listening, so it is fantastic that this recording is being made. Entagled Tales: In the summer of 2007, Robin de Raaff wrote Entangled Tales for the Boston Symphony Orchestra. Entangled Tales is built up of several layers. It is a continual variation of small elements: rhythms, brief melodies, and ever-changing sounds in the rich palette of a large symphony orchestra. He does not hesitate to use an opulent instrumentation in impressionist and expressionist sphere. Symphony no. 3: For the occasion of its 125th anniversary in 2015, the Het Gelders Orkest asked Robin de Raaff to write a special composition. The result is a symphony of three movements on the concepts of light and dark, referred to as illumination and eclipse. These words do not point to a state of being, but to motion. It is not just about states – light and dark – but also about motion: illumination and eclipse.
Cello Concerto recorded at Grote zaal De Doelen on 16-17 May 2013, Entangled Tales recorded at Anton Phililpszaal Den Haag on 29 November 2008, Symphony No. 3 recorded at De Vereeniging, Nijmegen in 23 April 2015