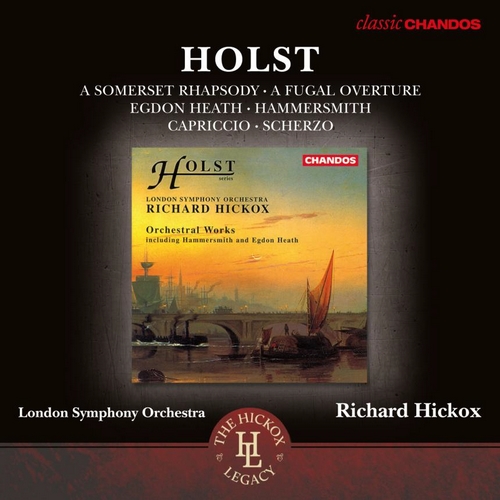 A Fugal Overture, Op. 40 No. 1, H 151
A Somerset Rhapsody, Op. 21 No. 2, H 87
Scherzo, H 192
Egdon Heath (A Homage to Thomas Hardy), Op. 47, H 172
Hammersmith, Op. 52, H 178
Capriccio (edited by Imogen Holst)
Richly endowed with musical qualities, Richard Hickox was a great champion of neglected music in general, and of British music in particular. His sudden death in November 2008 robbed the world of a most vital, industrious, and energising musician, whose discographical legacy remains a treasure trove of the record catalogue. With the Richard Hickox Legacy we wish to express our gratitude to and appreciation of this great musical artist.

This 1994 Holst collection is another recording with the London Symphony Orchestra under its then Associate Guest Conductor, Richard Hickox.

Re-issued at ‘classic Chandos’ price, it is a must-have for any fan of or newcomer to Holst, offering both familiar and unfamiliar works. Gramophone complimenting Hickox’s ‘sweetly expressive, songful manner’ and adding that ‘Hickox and the LSO make a spirited showing... the Chandos engineering is typically sumptuous throughout.’

Richard Hickox returned to Holst in 2007, embarking on a new series, with the BBC National Orchestra of Wales. He was recording what would have been the second volume of this survey when he was suddenly taken ill. Though that disc now will never be finished, the first instalment was released in January 2009 on SACD (CHSA 5069) and seen as a recording triumph, presenting neglected works advocated by a legendary conductor.