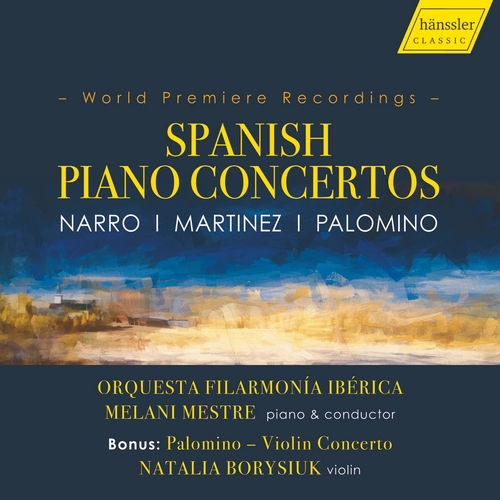 Manuel Narro:
Concerto for cembalo and orchestra in G Major

Mariana Martinez:
Concerto for piano and orchestra in A Major

It is the case that the survival of the Concertos which we present here for the first time, in a thorough revision and reconstruction, was most likely due to the specific location of each one of them: that by Manuel Narro, in a manuscript held in the monastery library at the Colegiata de Roncesvalles; that by Mariana Martinez, also known as Marienne von Martinez, in the musical archive of the Vienna Musikverein; and finally the concertos of José Palomino, in the Biblioteca Nacional de Portugal in Lisbon.

We have opted for performance on the piano in all three cases, given the early arrival of the first Cristofori piano-forte on the Iberian peninsula with the legendary castrato Farinelli at the court of Fernando VI.

Successfully combining the role of both pianist and conductor, Melani Mestre’s collaborations are a catalogue of over 80 of the world leading orchestras. Melani directly inherited the cherished Catalan Piano Tradition of Enrique Granados, while commanding a vast repertoire of more than 100 concertos for piano and orchestra by Spanish composers.
Recording: Barcelona - Can Roig i Torres Auditorium, November 6, 2016.