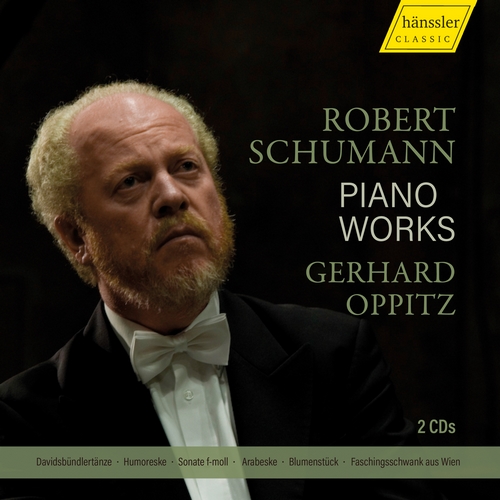 CD 2:
Piano Sonata No. 3 in F minor, Op. 14
Arabesque in C major, Op. 18
Flower Song in D flat major, Op. 19
Carnival Jest from Vienna, Op. 26
Within the realm of Romantic piano music, where new discoveries are constantly just around the corner, the contribution of Robert Schumann has always played a major part. True, he cannot rival the aura of Chopin’s works, of which Ignaz Friedman asserted that not only had Chopin opened the piano with them, he had closed it again.

(Schumann paid his own tribute in his reverent review of Chopin’s op. 2 of 1831, the Variations on Mozart’s “Reich mir die Hand, mein Leben”). Nor did Schumann embed in the history of piano playing such milestones of technical mastery and manual dexterity as Liszt who – inspired by Paganini’s concerts and enabled by the double-escapement action developed by Sébastien Erard in 1821 – had practically reinvented the instrument by the time he wrote his Etudes d’exécution transcendante in 1837

And neither the sprightliness of Felix Mendelssohn’s keyboard idiom nor Charles-Valentin Alkan’s exaltation of virtuosity are characteristic of Schumann’s piano music, even if he proves in his Abegg Variations op. 1 (1830) and his Toccata op. 7 (1832) that he brilliantly commanded both approaches to the instrument.
Recording: 9-13 December 2019, Irenensaal Baierbrunn. Piano: Stainway.