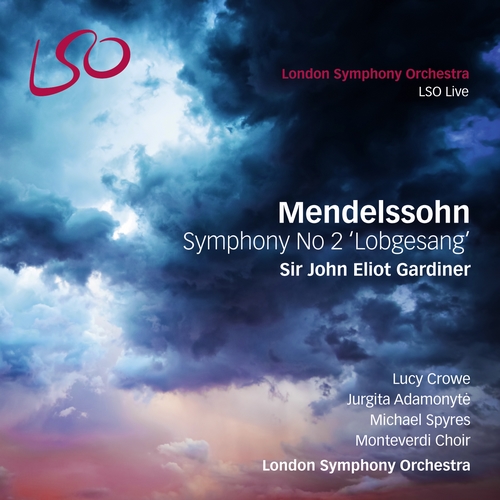 Symphony No. 2
"Lobgesang"
Bringing his acclaimed Mendelssohn cycle to a rousing conclusion, Sir John Eliot Gardiner presents the composer’s symphony-cantata, Lobgesang. Mendelssohn wrote that the piece ‘lies very near my heart’, and with its stately grandeur and religiosity, plus its sheer magnitude – double the length of any of his other symphonies – it stands amongst his most impressive works. Posthumously categorised by editors as the composer’s second symphony, it is also known as a ‘song of praise’ and three talented soloists join the LSO and the world-class Monteverdi Choir for this recording. While Gardiner is well-versed in the German’s output, this release documents his first performance of the work. In an interview for The Arts Desk, he said: It’s a piece I’ve been looking at for years, and I’ve never conducted it. I was a bit sceptical at first, thinking that it was the torso of a symphony with a cantata bolted on. But it isn’t. It’s a delight. It has a lot of the inventiveness and sheer melodic flow of the young Mendelssohn and it’s perfectly calibrated and constructed.’ Presented as a Pure Audio Blu-ray and SACD Hybrid package - which includes master quality audio and downloadable content - this is the perfect end to an exploration of a composer whose music known the world over, but also has so much more to offer. Summing up his feelings at the end of the project, Gardiner said: ‘My admiration for Mendelssohn has gone up enormously, as a result of really digging deep into these symphonies...it’s so rewarding with this group of players, they’re willing to go to the last enth degree, in terms of detail of phrasing and articulation, and that’s a joy.’
Recorded live in DSD128fs at the Barbican Hall, 16th & 20th October 2016