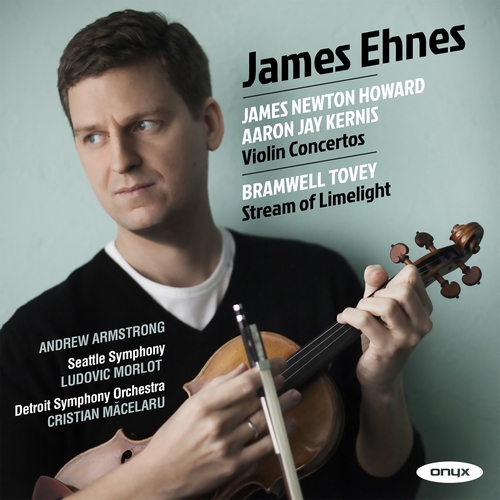 Bramwell Tovey:
Stream of Limelight
Three works written for James Ehnes, and receiving their premiere recordings. James Newton Howard’s music will be familiar to movie fans the world over. His 120 film scores include ‘The Prince of Tides’, ‘Michael Clayton’, ‘My Best Friend’s Wedding’, ‘The Village’, ‘Defiance’ and ‘The Hunger Games’ (the recording was produced by the legendary T Bone Burnett) and he is one of the most respected composers currently working in film. Commissioned to write a concerto for James Ehnes and the Pacific Symphony, Howard admitted to feeling ‘thrilled, excited, expectant and ultimately terrified’.

Bramwell Tovey and James Ehnes musical relationship goes back to 1990, and they have performed together countless times. Stream of Limelight gives James’s incredible technique ample opportunity to dazzle, and is a superb finale to this fascinating album of new compositions.