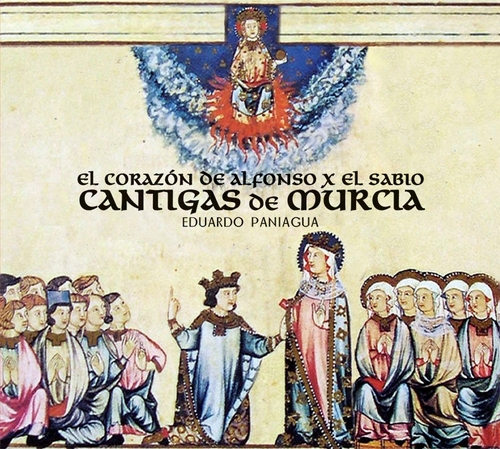 CSM 299 Order of Santa Maria De Espana (Instrumental)
CSM 297 The Virtue of The Image - "Com´é mui bono´a creença"
CSM 169 The Arrixaca in Murcia - "Aque por nos salvar"
CSM 201 Promised Virginity - "Muit' é mais a piadade"
CSM 339 The Ship From Cartagena (Instrumental)
CSM 89 The Jewness In Childbirth - "A Madre de Deus onrrada"
CSM 295/388 The King's Vision - "Que por al non devess' om' a"
CSM 99 Moorish Village - "Muito sse deven t*eer"
CSM 239 The Oath - "Guardar-se deve tod' ome de jurar"
"The Heart of Alfonso X" is a selection of cantigas telling stories which unfold in Murcia, such as one that takes place in the church at Arrixaca or another about the oath to Santa Maria de Murcia. Other cantigas are about the king’s feelings (his heart), in his thoughts and prayers to the Virgin Mary. Cantigas set at the time of the conquest of Murcia and the Mudejar uprising in the Wars of Granada, complete the programme. The Cantigas de Murcia form part of Pneuma's project to record a retrospective of the entire collection of the Cantigas de Alfonso X.

The Cantigas are considered to be Alfonso X’s most personal work and although they came from different sources and diverse collaborators a structured order is evident. Since the songbook was first written in about 1260, the presentation has always reflected the original personal verse and coherent symbolic design. A late troubadour, Alfonso chooses the tradition of “courtly love” as a way of giving his Lady the parchment codices with the songs dedicated to her.

The miniatures of the Cantigas de Santa María constitute a beautiful document in themselves, not only because of the perfection of the drawing and colour, but also because of the information that they give about daily life in the medieval Spain of the Three Cultures – Christian, Arab and Jewish. They are also of great iconographic value as they include many drawings of musical instruments. Scenes of chant and dance appear in some of the narrative and today constitute the principal source for the reconstruction of the instruments used in the performance and the recreation of the musical atmosphere.
Recording: Hugo Westerdahl, 2017, Madrid