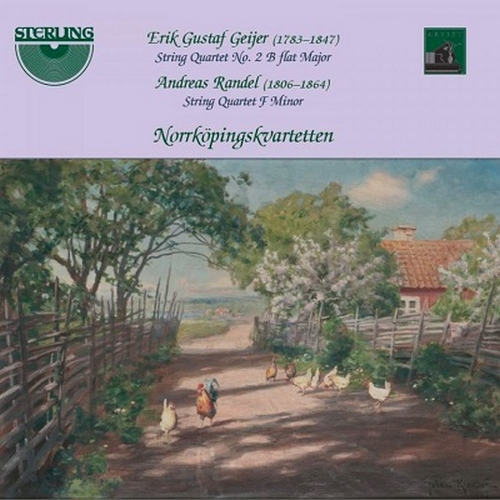 Andreas Randel:
String Quartet in F Minor
Geijer was one of the prominent figures in the formation of Götiska förbundet (The Geatish Society), who took the task of promoting archaeology, but also Swedish patriotism. As editor of the society’s magazine, he published his own poems in the spirit of the time and also his music settings of his poetry. Geijer showed a great talent for music early on. Although he seems to have considered a career in music, it remained for him simply an activity for spare time. His mind was for chamber music and the smaller format, as well as songs. In 1816 his first piano trio was composed and in 1822 the first two string quartets in F Minor and B flat Major, and during the rest of the decade, among other things, a piano quintet, a piano quartet and two violin Sonatas. Randel was a Swedish musician and composer. As concertmaster at the Royal Opera Orchestra he arranged and composed music for some 20 plays. Especially famous is his composition and arrangement of F A Dahlgren’s play Värmlänningarna (1846), which for many years was a beloved and recurrent feature of the repertoire of the Stockholm Opera. He also composed four violin concertos, overtures and chamber works. The violin concertos are written in a French virtuoso style while the chamber music is influenced by the late style of Haydn and the early of Beethoven. Among the chamber works there are three string quartets and several solo pieces for violin. This new release explores the chamber works of these two largely unknown composers.
Recording: Sveriges Radio 9th, May 1977.